open-access license: This is an open access article distributed under the terms of the Creative Commons Attribution License (http://creativecommons.org/licenses/by/2.5/) which permits unrestrictive use, distribution, and reproduction in any medium, provided the original work is properly cited.

The sacroiliac joint (SIJ) may be a source of chronic low back pain in 15 -22% of patients. Over the past four years MIS is an emerging standard of care for SI joint fusion. The International Society for the Advancement of Spine Surgery (ISASS) and Society for Minimally Invasive Spine Surgery (SMISS) conducted a survey of their members to examine current preferences in surgeon practice of MIS SI fusion.

To qualify for survey participation, the surgeon had to perform at least one open or MIS SIJ fusion procedure between 2009 and 2012. All surgeons were instructed to review their records. This included the number of surgical procedures performed annually from 2009-2012, site of service where each procedure was commonly performed, and average length of stay for each approach.

Twenty four percent (121/500) of the eligible members participated in this survey. This survey revealed that the percentage of MIS procedures increased from 39% in 2009 to over 87% in 2012. The survey showed a significant increase in average number of MIS surgeries and a significant difference between open and MIS surgeries in 2012 (p<0.0001). In addition, 80% of the survey respondents indicated a lack of preference toward open approach if that was the only available option.

According to performed survey, MIS SIJ fusion is preferred over open technique. Incorporation of the MIS technique into the spine surgeon's specter of skills would allow an increased number of surgical options as well as possible increase in outcome quality.

Sacroiliac joint dysfunction, caused by degenerative sacroiliitis or sacroiliac disruption, has been recognized as a legitimate pain generator since the 1800’s, but has remained under-appreciated and under-treated until the emergence of advanced diagnostic methods as well as the development of reasonable, effective, and less morbid interventional modalities. Sacroiliac Joint (SI joint) pain is a significant cause of low back pain [1-3]. It has been reported as the pain generator in 15%-22% of patients with low back pain [1,4]. Non-operative management such as physical or manual therapy and fluoroscopic guided steroid injections are the first line treatment and in many cases the definitive treatment [4-6]. When non-operative management fails and SI joint symptoms persist, arthrodesis becomes a viable option. A variety of surgical techniques have been developed to fuse the SI joint, including traditional open arthrodesis with plates and/or screws. Emerging minimally invasive techniques have been developed because of potential advantages such as minimizing soft-tissue trauma, less operative blood loss, faster rehabilitation, and reduced length of hospital stay [7-9, 11, 13, 14].

Surgeons should choose the approach that will provide the best clinical outcome for the patient and treat their medical condition with the least risk of complications. Since the development of instrumentation allowing SI joint fusions via a less invasive approach, the number of open procedures has significantly declined because the surgeon community appears to prefer the minimally invasive approach in the best interest of their patients [18]. Over the past four years MIS is an emerging standard of care for SI joint fusion. The International Society for the Advancement of Spine Surgery (ISASS) and Society for Minimally Invasive Spine Surgery (SMISS) conducted a survey of their members to examine current preferences in surgeon practice of MIS SI fusion.

Two organizations, ISASS and SMISS, have been selected as representatives as their members encompass a large portion of spine surgeons trained to perform MIS of SIJ fusion. In addition to ISASS and SMISS rosters, manufacturers of instrumentation utilized in minimally invasive procedures provided ISASS with the total roster of surgeons trained to perform MIS SIJ fusion procedures. These lists were distilled to identify surgeons among the membership of ISASS and SMISS. The survey questions were created by the Executive Committee Members of the ISASS and SMISS Coding and Reimbursement, Public Policy Groups and a survey consultant expert (Appendix 1). This survey was executed via an internet-based platform and administered by an independent, third party vendor.

An initial screening question was used to determine if the respondent was qualified to participate in the survey by asking, "Have you ever performed a sacroiliac joint fusion?” If a “no” response was given, the survey was concluded. If the surgeon answered “yes”, they were able to proceed with the survey (Appendix 2). All surgeons were instructed to review their records since the questions were pertaining to a retrospective analysis. This included the number of surgical procedures performed annually (both open and MIS) from 2009-2012, site of service where each procedure was commonly performed, and average length of stay (ALOS) for each approach.

To qualify for participation, the surgeon had to perform at least one open or MIS SIJ fusion procedure between 2009 and 2012. Responses were collected and analyzed. Additionally, we asked this question: “If the open procedure were the only option available for patients, would you perform SI joint fusions for conditions other than major traumas?” in order to obtain insight into the preference for open versus MIS approaches. The last two questions presented by this survey addressed the issue of ‘roadblocks’ in performing MIS procedures for SI joint fusion. These questions allowed open ended answers that were recorded but not quantified.

The survey was sent to a complete ISASS and SMISS membership totaling 2,200 surgeons. The survey yielded 212 responses of which 121 persons were eligible as they had performed at least one SI joint fusion. According to instrument manufacturers, approximately 500 surgeons have completed a clinical training course and have been certified to perform MIS SI joint fusion. Thus, 24% (121/500) of the eligible population participated in this survey.

A marked change and an inversely proportional relationship were noted between the use of open and MIS surgical approaches when the site of service was observed. When looking at the use of open vs MIS surgery in hospital inpatients and outpatient, as well as Ambulatory Surgical Center (ASC) sites, one can observe that the outpatient and ASC sites perform MIS surgical approach versus open procedures. Summary of these findings can be observed in Fig. (4) and Table 2. Average length of stay for both types of surgical techniques was reported by our surgeon population. The average length of stay for Open surgical procedure was 4.33 days while the average for MIS procedure was 1.69 days (Fig. 5). Answers to question 6 addressed surgeon preference toward either open or MIS techniques. Under the assumption that the open procedure would be the only available procedure, 77 surgeons indicated that they would not perform the procedure, while 33 answered positively to performing an open surgical technique (Fig. 6). Thus, the 80% of the survey respondents said that they would not perform an open surgical approach if that was the only available option.

In 2008 the FDA approved the first minimally invasive device for SI Joint arthrodesis, which marked the beginning of increased utilization of the MIS technique. Presumably, this is due to improvement in diagnosis, as well as improvement of the risk-benefit ratio of fusion with the use of MIS. The increasing proportion of MIS SI joint fusion suggests that MIS techniques have become a reasonable treatment alternative in the continuum of care between continued non-operative care and invasive SI joint fusion surgery, which may further inform payer coverage and reimbursement decisions.

The population participating in the survey is representative of the surgeon population trained to perform MIS. We, therefore, believe this is a reasonable representative of surgeons who are ISASS or SMISS members performing SI joint fusion. There is a clear trend from 2009 to 2012 for preference of MIS SIJ fusion over the open technique. This could be either a finding unique to the surveyed surgeon group or may represent or more general national trend. Ackerman et al. raised the question of total utilization of Current Procedural Terminology (CPT) code 27280 (arthrodesis, sacroiliac joint) across all payers, by analyzing the number of Medicare-sponsored SI joint fusion procedures divided by the Medicare portion of the payer mix (45.39%). Data for this study were obtained from the AMA/Specialty Society Relative Value Scale Update Committee (RUC) database from 2001 to 2011. Ackerman et al. observed that the total number of estimated SI joint fusion procedures increased from 189 in 2001 to 3,900 in 2012. MIS SI joint fusions accounted for an increasing percentage of the total, ranging from 0% in 2008 to 76% in 2011, with an estimate of 85% for 2012 [15]. These data were obtained using MIS data provided by 1 of the 4 FDA-approved SI joint fusion device manufacturers (SI-BONE, San Jose, CA) on year-to-date sales through September of 2012, with an average of 400 cases per month for the remainder of 2012. We also observed similar patterns of increase in MIS performance utilizing data obtained in the survey of ISASS and SMISS surgical societies.

Robust outcomes data are continuing to emerge, and the cost-effectiveness of surgical versus non-surgical treatment needs to be established.

There is increasing evidence that MIS SIJ fusion is preferred, over open technique, by surgeons who perform MIS SIJ fusion. This appears to be an increasing national trend. Surgeons who perform MIS SIJ have indicated an unwillingness to return to the open technology as evident in the answers of surveyed surgeons. In addition, consequent incorporation of the MIS technique into the spine surgeon's specter of skills would allow an increased number of surgical options as well as possible increase in outcome quality.

The authors confirm that this article content has no conflict of interest. Kelli Hallas - Consultant for Zyga; Coding and Advisory Board member for ISASS.

This study was funded in part by SI-BONE, Inc. and Zyga Technology.

Goal of the survey:

1. Have you ever performed a Sacroiliac (SI) Joint fusion?

2. What are the most common disorders for which you perform SI joint fusions?

3. For the prior four calendar years, please estimate how many SI joint fusions you have performed, broken down by traditional open vs minimally invasive procedures

4. For all of the SI Joint fusions you’ve performed over the last four years, please break down by percentage the site of the care delivered:

5. For SI joint fusions performed as hospital inpatient procedures over the last four years, what is your Average Length of Stay?

6. If the Open Procedure was the only option available for patients would you still perform SI Joint Fusions for conditions other than major traumas?

7. Is your professional practice experiencing any roadblocks (i.e. coverage trends, reimbursement related obstacles) prohibiting you from performing SI Joint Fusions on your patients who would benefit from the procedure to treat their medical condition? 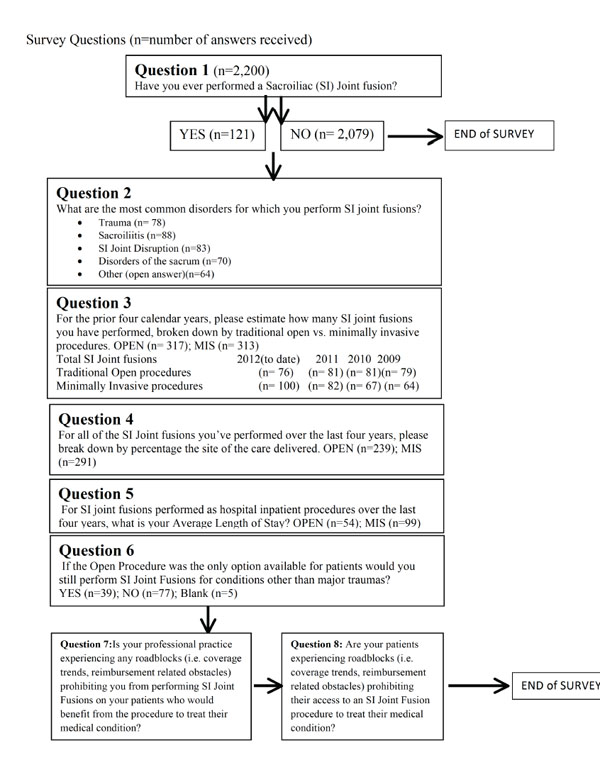